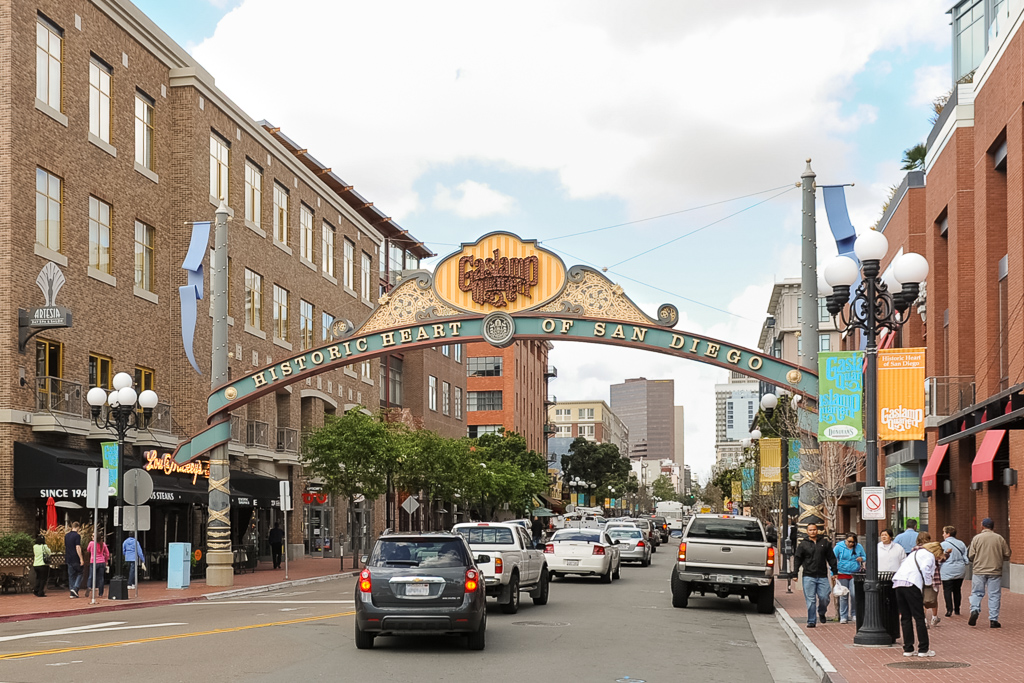 The Gaslamp district in downtown San Diego is a mile long promenade that extends along Fifth Avenue. It includes 10 street blocks going east to west starting at the Convention Center and 2 blocks south to north. Bordered by the East Village to the east and the Marina district to the west, this neighborhood is at walking distance for most downtown residents. Such compact area attracts tourists and residents alike to its nightlife, theaters, and more than 100 restaurants.

The Gaslamp district, also known as Gaslamp Quarter, was established in the mid-1800s. The initial development of the city was influenced by Alonso Horton; whose dream was to create a city by the waterfront. For the next 40 years, the Gaslamp’s main commerce and attractions were a public theater, the Chinese Mission School, Hotels, brothels, saloons, and gambling.

The radical redevelopment to the Gaslamp Quarter came on 1970’s when the San Diego City contributed fund to refurbish and maintain the neighborhood’s historic buildings. Buildings such the Old Spaghetti Factory, the Pacific Hotel, and the Keating building were among the first to be repaired. Eventually, The Gaslamp Quarter became recognized as a national Historic District.

In the 1980’s the Gaslamp Archway was installed at the west end of fifth avenue, creating one of the most recognized San Diego landmarks.

When it comes to food, the Gaslamp offers a world of options. Italian, Spanish, Irish, Chinese, Mexican, Asian, seafood, Middle-eastern and continental food are all present in this neighborhood. Whether in the mood for a casual Mexican taco, an elegant 5-course meal or just appetizers and cocktails with friends, the Gaslamp will satisfy any palate.

With the many options such galleries, theaters, movie theater, nightclubs, bars, and cafés, the Gaslamp districts will satisfy the cultural and social needs of all generations.

The Gaslamp buyer is looking primarily for studios or 1 and 2 bedroom condominiums in mid-rises. Investors, first-time home buyers, and the younger generations appreciate low HOA fees, lower prices, and the proximity to all entertainment the Gaslamp district offers. Buyers interested in the condo-hotel concept, which are deeded units that can be managed and rented by the Hotel, should look into condo units in the Hard Rock Condos and Se San Diego buildings. Here, residents will get the benefits of all the services the hotel offer such room service, valet, concierge, etc.