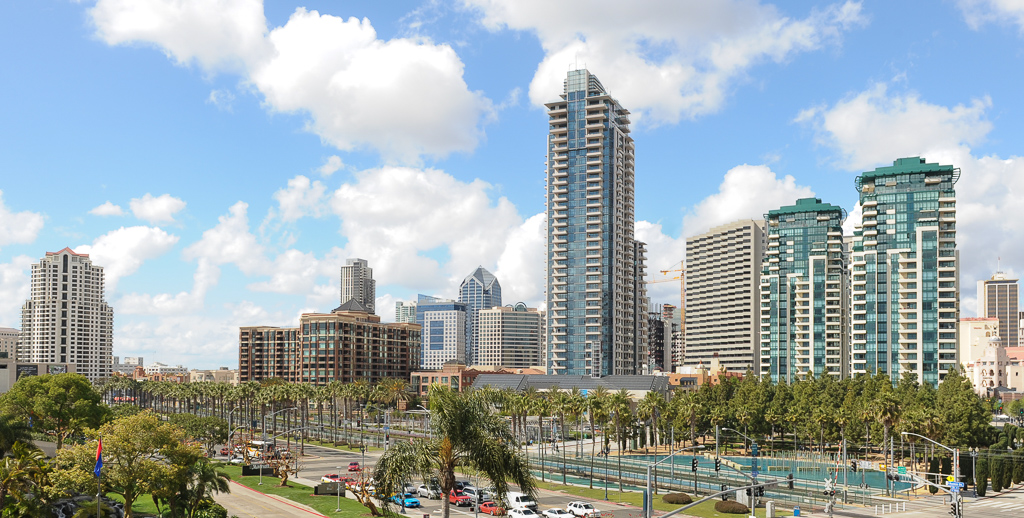 Marina District is considered by many as the most desirable downtown San Diego community. Bound on the west and southwest by the San Diego Marina, to the east by the Gaslamp Quarter, and to the north by the Columbia District. As the most established community in Downtown you will see that most residential mid-rise and high-rise complexes were built at least 15 years ago, in contrast to most other districts, where construction is much more recent and most buildings are less than 5 years old.

Marina District main attractions include Seaport Village, the Embarcadero, San Diego Convention Center, Pantoja Park, and the Children’s Museum, all of which attract international interest. Seaport Village is one of the most scenic walks in San Diego, offering a stroll through restaurants, gift shops, and various marinas along the water’s edge of the San Diego Bay.

The Embarcadero houses major cruise liners that travel to Coastal Mexico, Hawaii, and up to the Alaska coastline. The Convention Center holds events such as the International Auto show and the COMIC-CON International Convention, this last welcomes close to 130,000 attendees every year. Built in 1850, Pantoja Park is a San Diego Historic Landmark and the oldest park in the city of San Diego. This is a popular Downtown spot visited by both walkers and dog owners.

Buyers in the area will find condos with more ample layouts than newer built complexes in other Downtown neighborhoods. Don’t be surprised to find a 1,800 Sqft unit, with 3 bedrooms, 3 baths and amazing bay and ocean views. Many older units in the Marina District have gone through extensive remodeling projects and now have updated bathrooms and kitchens. Many units have even updated their floor plans by removing non-structural dividing walls, transforming their units into an open layout ideal for entertaining and enjoyment of the Downtown skyline and dramatic ocean views.

These remodeling projects are more noticeable in complexes such as Harbor Club, Watermark, and Meridian. Touring these complexes it’s not uncommon to find two units that may have been identical when first built, but now appear completely different in their layouts and amenities. A non-remodeled unit may be more affordable and ideal for the buyer wanting to personalize their unit.